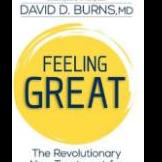 This group is for those who have read or are reading the book "Feeling Good" or "Feeling Great" or any of the other books by Dr. David Burns