What movie scene, makes you cry simultaneously for both yourself and the movie character. 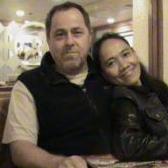